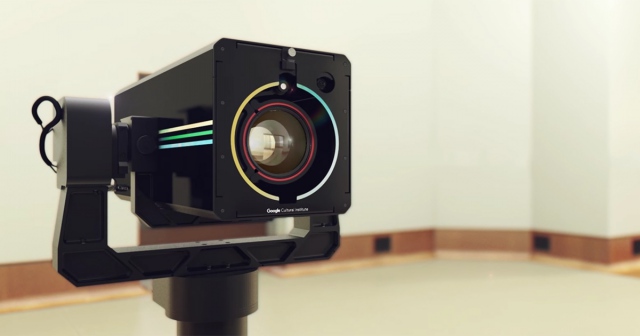 Google developers have designed robotic cameras allowing to qualitatively digitalize great artworks. Virtual high resolution painting versions will be presented at the Google Cultural Institute free service. The digitalization process of paintings is pretty simple: an operator should determine artwork margins and Art Camera will move across the painting on its own automatically downloading obtained images on Google server. After completing the shooting process, the system integrates all received shots creating the whole high-resolution picture. The presentation reel tells that the digitized painting version reflects a color, brush stroke style and texture of paintings as precisely as possible. Art Camera turns nonvisual things into visual allowing to distinguish any smallest detail of the artwork that can be kept in the museum halfway around the world.

High detalization and image accuracy can be obtained due to the gigapixel shooting method. Art Camera is also equipped with a sonar and auto focus laser. Google developers said that they managed to achieve faster painting digitalization. Previously, it took the whole day for shooting 1 м x 1 м painting, but now the process requires only half an hour. However, art cameras still can’t shoot too big paintings and 3D objects. Thus, grand installations and delicate sculptures won’t be presented at Google Cultural Institute, at least for now. Currently, the company has released 20 robotic cameras that will be able to operate in several famous museums for free. So, one will be able to enjoy world high-resolution artworks in Google Cultural Institute virtual galleries soon. By the way, works of Monet, Signac and other great painters are already available on the website.