When project founder does not hesitate to work as a dishwasher. Interview with Katerina Diachenko, founder of Startup Kitchen

07 December 16When project founder does not hesitate to work as a dishwasher. Interview with Katerina Diachenko, founder of Startup Kitchen 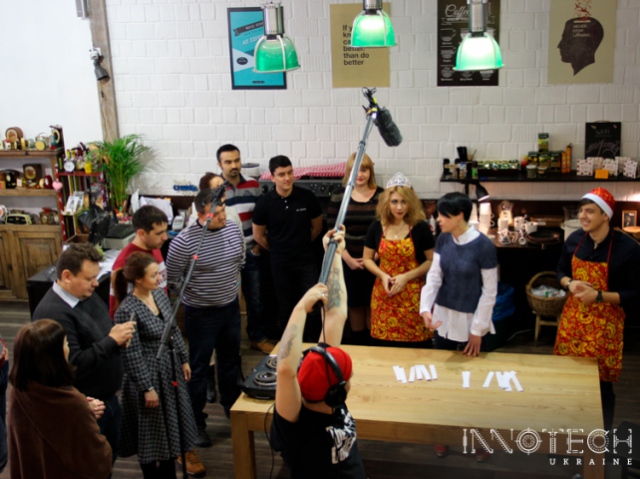 On October 5, we visited Kiev timeclub, called Ziferblat, where one was shooting the final of Startup Kitchen, Ukrainian reality show about beginning entrepreneurs and investors. It is almost two months now since the first series.

During the season, startup authors should have shown the ability to sell their ideas and establish profitable business. Shooting was conducted at restaurants: young entrepreneurs had not only to make an investor’s psychological profile but also to order an appropriate dish for them.

The task for finalist teams was more complicated: to prepare the dish on their own using limited product set.

If we hadn’t known what we had to see, we would have thought that we came to some kind of Hell's Kitchen cooking show. Teams were bargain with each other, exchanging butter for spices and bacon for tomatoes.

Katerina Diachenko, a project founder, either met late investors or brought a lot of dishes to Zifeblat store room and thoroughly washed them with Fairy dish washing liquid. As a result, Katerina had idle moments to communicate on the record only at the end of shooting when Zifeblat employees asked operators to shut up shop and there were plenty of dirty dishes. So, if we had published the audio recording of the interview, you would have heard sound of bubbling water on the background.

IT: You have completed the first season of Startup Kitchen. Will you shoot the second one?

K.D.: We are going to make the second season but haven’t come up with the city yet. A start month is also unknown.

IT:  How did you come with the project idea? How did it get started?

K.D.: Being an entrepreneur, I perfectly understand what my colleagues face. They should sell their products, attract investments and promote themselves somehow – attract attention to them and their products. Thus, I wanted to help them with something.

But I could not reach these results without the team, involved in shooting: videographers, sound designers and MCs. Now, you can see them in one role, but in fact, each of them focuses on various areas. And I am glad that our team consists of 10 people.

IT: How long did you build a team and how difficult was it to create it from scratch? How much time has passed between the idea and full gathering of the group?

K.D.: Actually, everything is quite simple. The idea appeared at the end or mid-July. I talked to guys I knew. Some of them work with shooting, others, including film editors and technicians, work behind-the-scenes. So, there are four of us. Afterwards, Anya and then Dima-Serezha-Sasha joined us.

The most interesting thing is that teams involved in projects help us in arrangements.

IT: Let’s talk about them. Do you have any favorites among participants?

K.D.: I like all of our participants. If I can help them somehow, I will do it.

IT: You attracted Microsoft for assistance, didn’t you?

K.D.: Yes, we did. We cooperate with Andrey Burlutskiy, the representative of Microsoft, working with 15 countries, if I am not mistaken (Andrey Burlutskiy – the head of sales department at Microsoft focusing on Office). Unfortunately, he couldn’t arrive for shooting.

IT: What does your cooperation consist of?

K.D.: They will award winners selected by jury. But awarding will be a bit later.

IT: Could we photograph you out of kitchen?

K.D.: Yes, but you could do it right here. We however Startup Kitchen.

IT: So you won’t be against the fact that we will publish photo of you washing dishes, will you?