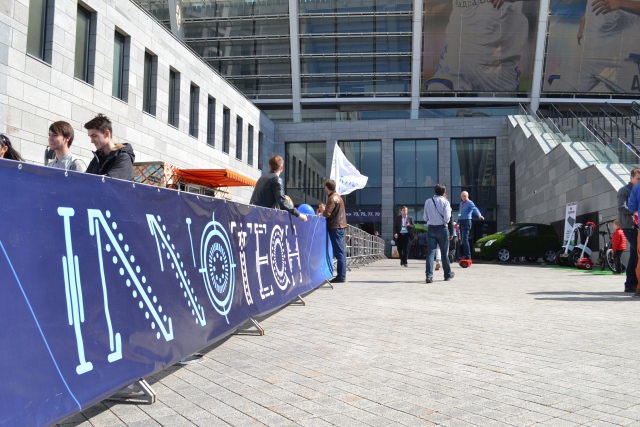 On April 9 -11, 2015, the capital of Ukraine hosted for the first time a three-day forum InnoTech Ukraine that demonstrated the latest achievements of science and technology in five different areas.

For three whole days, the NSC Olympiyskiy managed to become a powerful innovative centre of attraction for the best Ukrainian and foreign experts, as well as all interested in innovation.

According to the registration committee, the total number of the forum visitors exceeded 5 000 people. InnoTech Ukraine brought together about 50 professional speakers, who made presentations or participated in discussions, 30 exhibitors and attracted a large number of domestic media and celebrities interested in innovation. The general sponsor of the event was Noosphere Ventures.

The first two days of the forum, April 9-10, were held in the format of B2B, involving five specialized conferences, speed dealing, discussion panel and demo zone. Investment and venture capital funds, business accelerators and incubators for start-up projects, as well as consumers of products and all those interested in the application of modern technologies in their business were among the participants during business days.

"Today, Ukraine has all opportunities for implementation of innovative technologies. There are talented developers and people willing to invest in order their projects could reach the world market. I do hope that thanks to this event Ukraine will obtain much more success stories showing the whole world that we have not only the talent but also practical examples of its application. Therefore, it is all up to us, let's do it!" Andrew Kolodyuk said to all present. 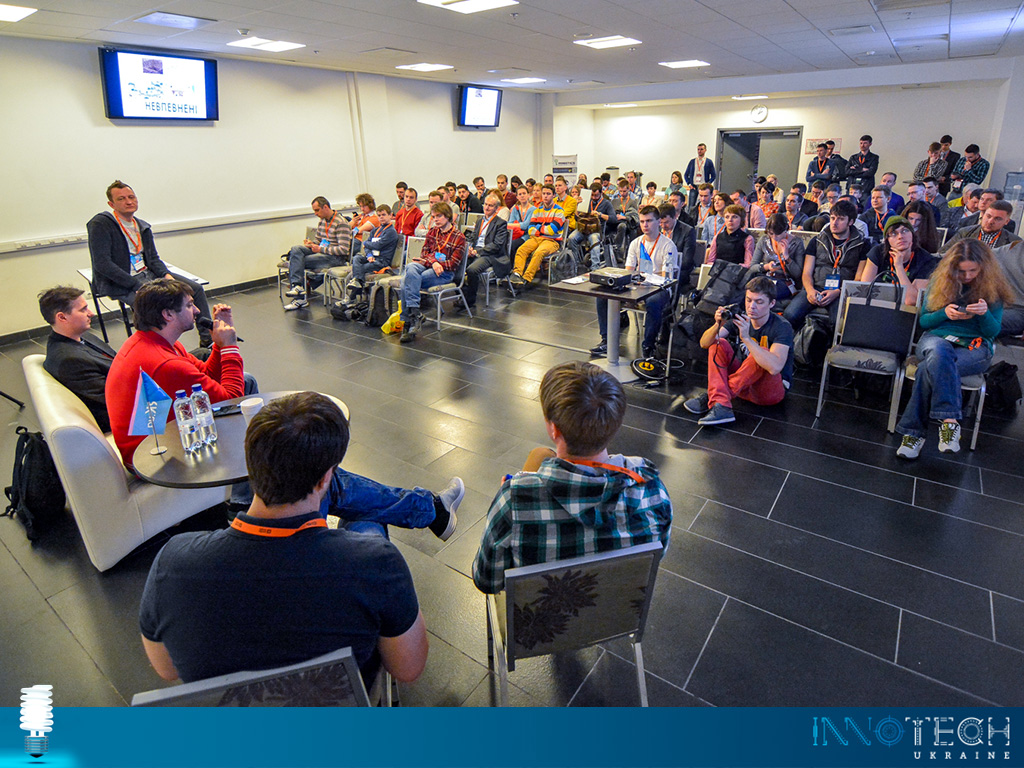 On April 9, there were held three conferences in the framework of InnoTech Ukraine: 3D printing, Robotics and Health care.

The listeners of the section devoted to robotics discussed together with the speakers the use of industrial robots in the production, development of UAVs and legal issues of software companies in the industry. Most of the participants of the conference noted that currently the main and most important areas for the implementation of robotics are industry and education.

Health care conference was able to bring gather in one room not only developers of innovative solutions for the industry, but also the representatives of the private and public medicine interested in the implementation of modern technologies in their workflow.

The special guest of the conference was Antti Pohjolainen, Microsoft Healthcare director within Central and Eastern Europe. The expert shared the implementation experience of Hospital of the Future project, described ways of usage of wearable and mobile technologies in medicine, and mentioned how telemedicine could be useful for health care facilities and other. Annti presented Microsoft projects that could be implemented in Ukraine. The speaker said that the personalized medicine was the thing of the future and that he always was guided by the principle of "a patient in the centre of attention."

The second day of the forum was full of incredibly important information. On April 10, InnoTech Ukraine held a conference "Smart Technologies" and "Education".

We should note that both of them attracted a capacity crowd and were able to keep the audience on its toes until the end of the reports. It was attributable to the charismatic moderators, Ilya Kenigshtein (smart technology) and Andrew Pivovarov (medicine), and all of the speakers who affected everyone.

The guest of honour of the conference dedicated to innovations in education became the Minister of Education and Science of Ukraine Sergey Kvit. He said, "Ukraine needs new standards in education. The Ministry is willing and able to assist in determining the direction of development of modern educational system. And I believe that this forum can help us in this as it creates a two-way dialogue."

A panel discussion "Prospects for electric cars in Ukraine" was also organized as part of the conference dedicated to smart technologies. It brought together representatives of such companies as Shooter.ua, Tesla Club, ElectroCars and Electro-AVTOS to talk about the development of ecological means of transport in Ukraine and ways of their promotion.

"Ukraine needs electric cars. This is proved by the number of homemade electric cars, which number as of today (only officially) is more than fifty. But I think this figure is underestimated because many craftsmen are just hiding," a participant in the discussion said answering questions about the prospects for electric vehicles in the country.

The speech of a tandem of Oksana Goshva, Vladislav Kurmaz and Pavel Pedenko should be noted separately. They spoke about what big business could learn from start-ups, and accordingly about their own experience of cooperation with the developers. 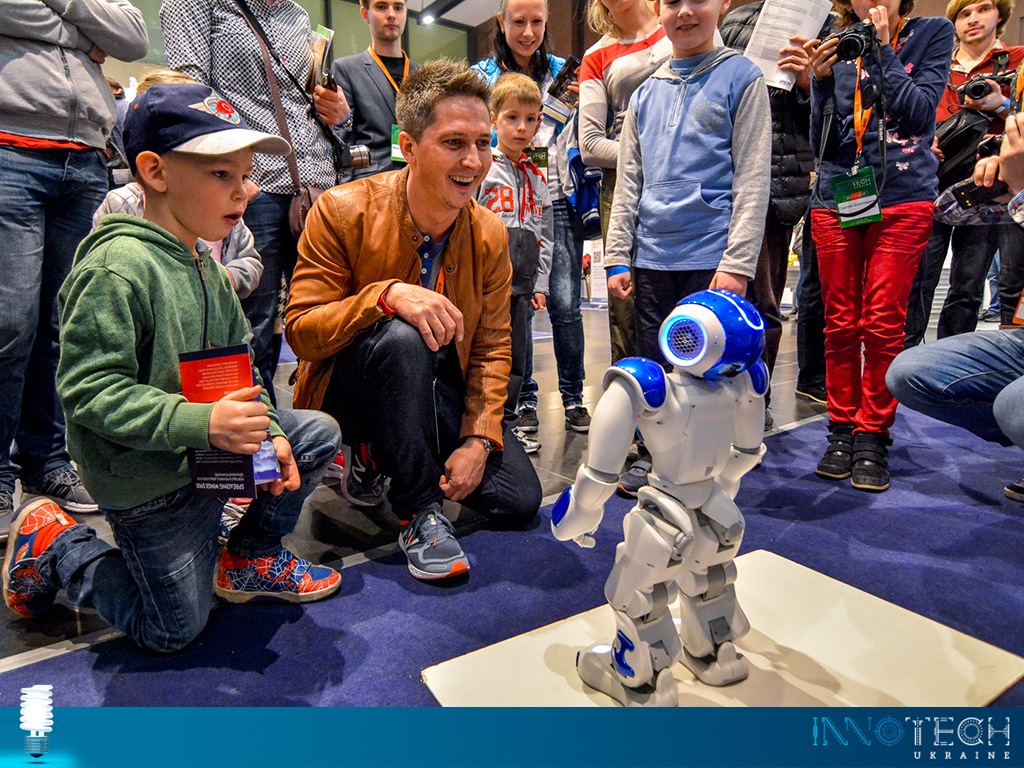 The site, which brought together more than 30 companies working in the field of innovative solutions, was able to please even the most demanding visitor. The participants, who presented their products and services, decorated their stands with great originality.

The stand with fruit from Polygator, the robotized mannequin from "Mekhanizator", drones from Fly Technology, which during the lunch break flied over the stadium, and, of course, electric cars presented by ElectroCars and Tesla Club. It will just suffice to mention the area with 3D equipment and virtual reality from Epson!

Throughout all days, the guests could see the real work process of 3D printers, practice in drawing with a 3D pen, test virtual reality glasses and play virtual piano. In addition, the main heroes of the forum were Nao robot (Noosphere Engineering School) and Max telepresence robot, which entertained guests with their singing and dancing. Prolego Smiles, Kossack 3D, Bitrix, Luciding, etc. also presented their new products at the forum. 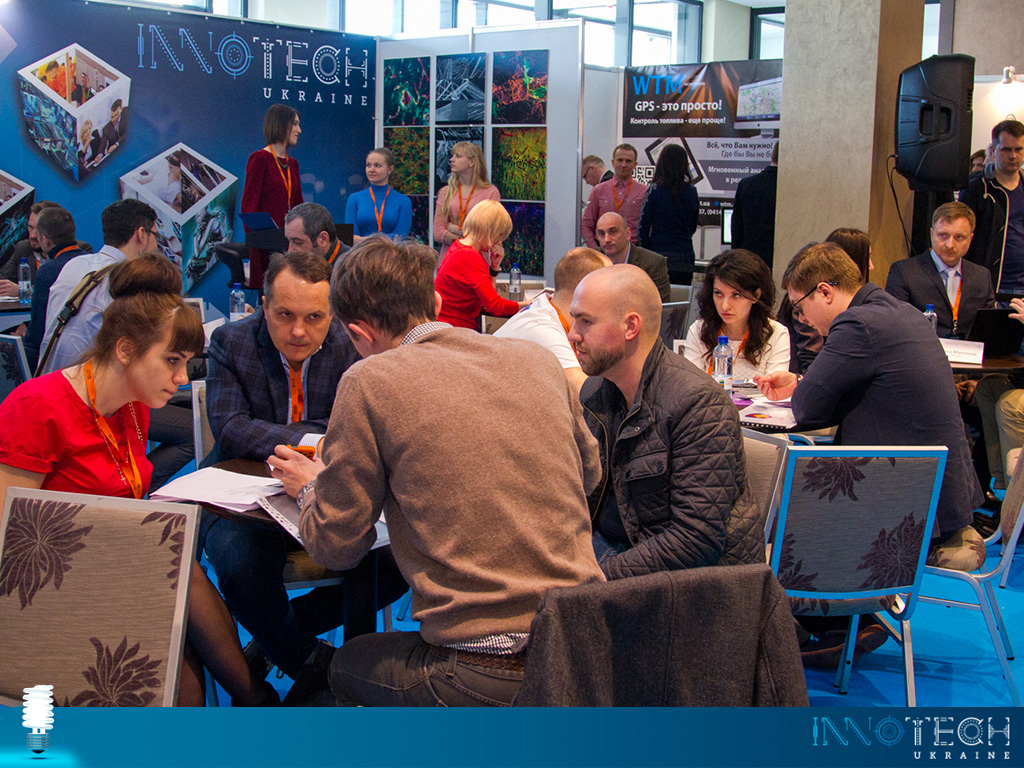 The platform for meetings of developers and investors remained, probably, the noisiest place on the territory of the forum throughout the day.

"Today, we were presented quite a lot of interesting and promising start-ups. Of course, within 5 minutes it is difficult to determine the prospects for a project, but we were able to identify several interesting developments," the invited investor Alexander Soroka (Startup.ua) said to the journalists.

We should note that many developers were able to get interesting offers from investors to continue their work on projects. 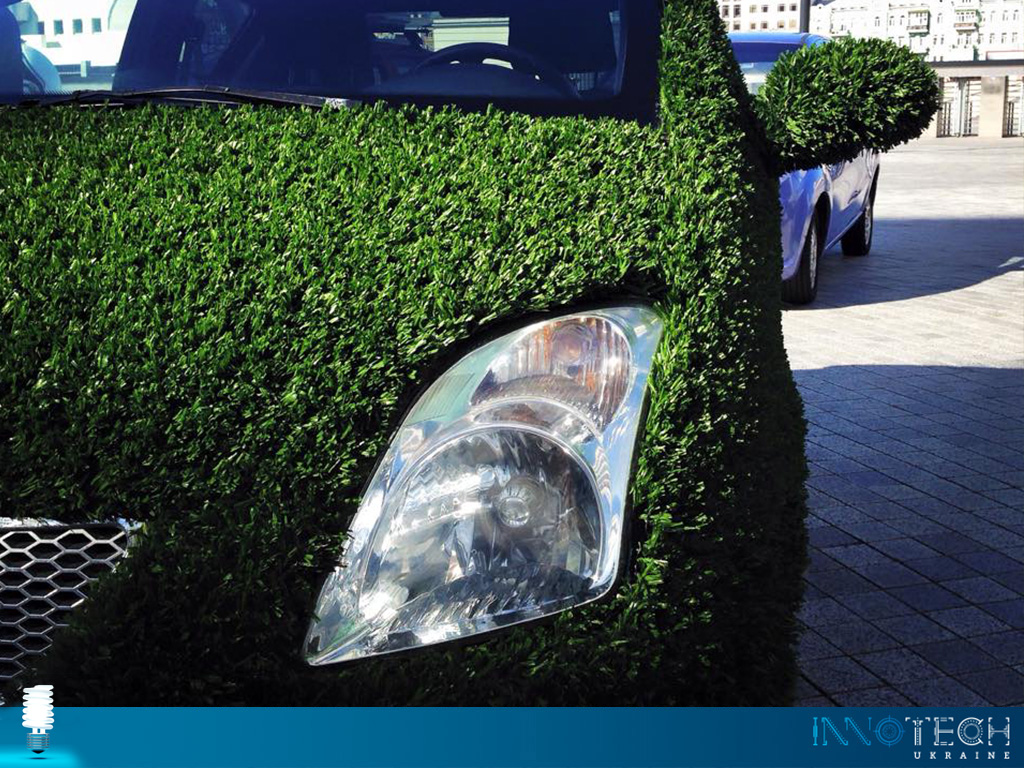 A real sensation was the mass run of electric cars, which brought together the owners of such ecologically friendly mode of transport for its promotion among the Ukrainian motorists.

The run involved such companies as Shooter.ua, ElectroCars and Tesla Motors Club, as well as many other fans of electric vehicles.

This auto race, which was held within the first innovative forum InnoTech Ukraine, set a new record of Ukraine involving 26 cars. It became the largest run in the country and attracted the attention of government agencies. In particular, the Minister of Ecology and Natural Resources of Ukraine Igor Shevchenko was present at the event. He expressed his support for enthusiasts of ecological transport and assured that he would promote the popularization of electric vehicles in Ukraine at the state level. As proof of this, the minister tried his hand as an electric car driver and took part in a run. 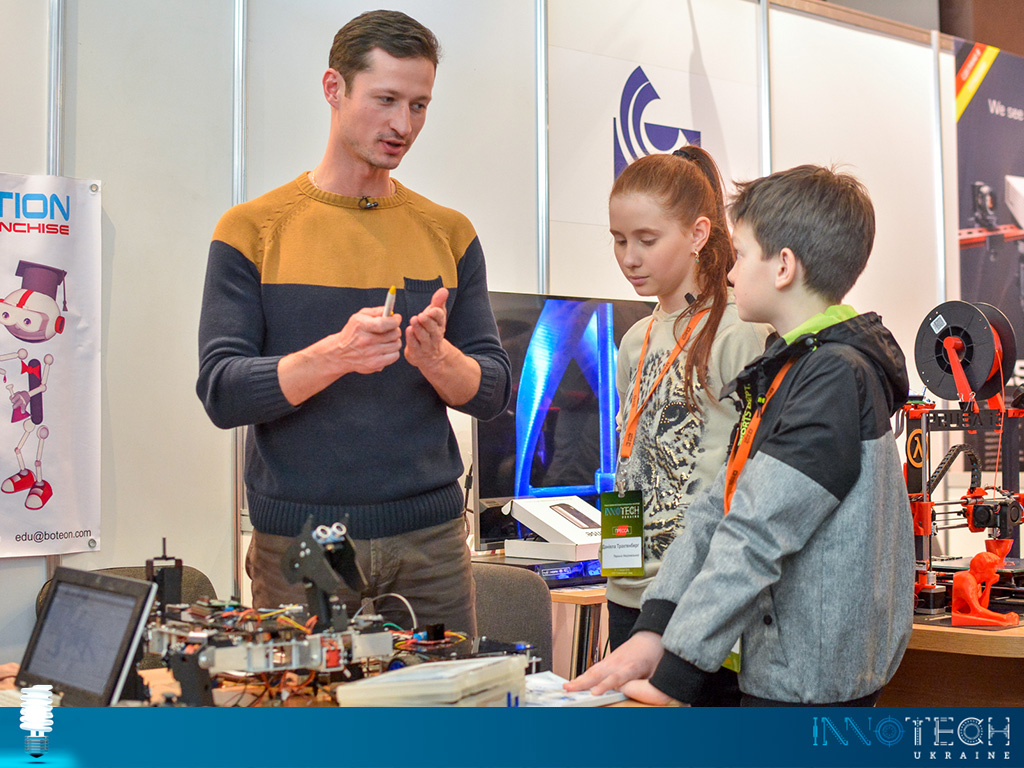 The third and final day of the Forum opened its doors for the youngest fans of innovative technologies. Throughout the day, children could visit an area with master classes in robotics, Lego, physics, chemistry and 3D printing.

Practical classes united children from 4 to 12 years old who were able to collect animals and superheroes from Lego (ProLego), make a magic night lamp (Boteon), construct a true 3D printer (Kossack 3D), as well as make "smart clay" or "non-Newtonian" liquid with the help of experts from the Gay Science laboratory.

Among the large number of the forum visitors, we would like to mention Ukrainian TV stars who are active supporters of innovative reforms. They are the main bachelor of the country Konstantin Yevtushenko and showman Alexander Pedan. Ukrainian hero of Bachelor-4 has long been an avid electro car fan that is why he was involved in setting the record for the mass run and in the thematic discussion panel. The famous TV presenter is also interested in modern innovations and notes the importance of ecological mode of transport in today's world and the possibility of robotics (including drones).

Summing up the forum InnoTech Ukraine, which was incredibly intense and rich in a variety of formats of meetings and exchange of information, the organizing team would like to express its deep gratitude to all the participants and guests for their contribution to this project.

We did it all together! We are proud of your designs and ideas that can change and are already changing the future of our country. Let's do it together!

The team of Smile-Expo thanks everyone who was able to join the innovation, and believes that next year we will not only repeat that success, but also surprise the whole country with the talents.