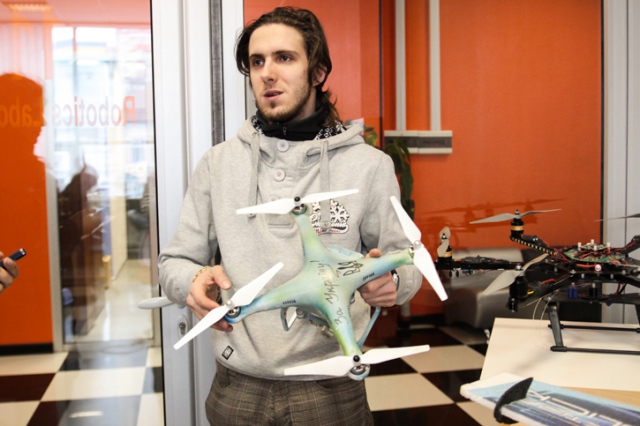 If you are at all following international news then you know that the situation along the Ukrainian/Russian border is extremely dangerous. The geopolitical implications of this war, if not settled, could potentially spill over into surrounding areas, ultimately leading to widespread chaos in the region. With this said, there is a glimmer of hope, as this week an international team reached a cease-fire agreement after marathon peace talks in Minsk. Although all the details of the cease-fire have yet to be completely ironed out, it will go into effect at midnight tonight. The bloody confrontation has been anything but peaceful thus far, so any sign of a cease-fire should be well received by civilians on both sides of the battle.

In the midst of all this, the Ukrainian Army is using 3D printing and drone technology in quite an interesting way, perhaps saving human lives on the battlefield. Volunteers are funding and 3D printing aerial drones in the Robotics Lab at the Step IT Academy in Kyiv. These drones have been put to use by the Ukrainian Army as a way to monitor the situation that’s been developing with the pro-Russian separatists in eastern Ukraine from a safe distance.

Dmytro Franchuk, Deputy Head of the Robotics Lab, is heading up this initiative, already having produced 30 3D printed drones, which are being used in battle. The lab, on average, has been using 20kg of thermoplastic per day within several 3D printers. The drones, which can capture images as far away as 2.5 kilometers, can stay in the air for up to 20 minutes at a time.

Each drone costs approximately $1,200 to 3D print (most of the expense is in the human capital, not the materials themselves), and another $3,000 in other sophisticated equipment is required. This, however, is compared to the typical $30,000 cost for similar drones which are not 3D printed.

Franchuk is a busy man apparently, as he is both fighting on the front lines as well as from the lab. [d2]

“As I was the only developer of drones in the lab, I also had to go to the war front to teach soldiers how to work with them. It took time I could use for production,” Franchuk says.

Approximately 90% of all the parts in each of the 30 drones are in fact 3D printed on any of the three machines that the lab has acquired. The 3D printers themselves cost just $1,600, and are currently used 24/7, producing these battle drones as well as other gadgets.

We will know soon if this cease-fire will hold up, or crumble like the last one. In the meantime Ukrainian volunteers will continue producing these 3D printed drones for their army in the event that such an agreement with Russia should deteriorate.