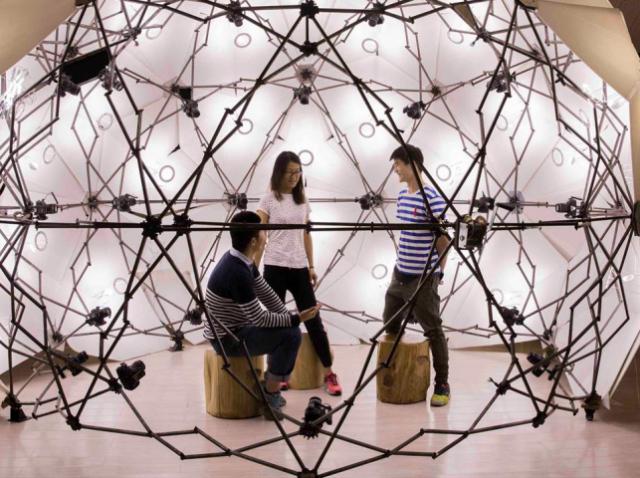 A 3D Copypod unique folding sphere for 3D scanning has been presented by the industrial design division of the Chinese company named People’s Architecture Office. The sphere can be used for the creation of 3D printing models.

As a prototype, Chinese developers used Hoberman sphere – a ball that folds and unfolds and is capable of taking bizarre forms. So does 3D Copypod. You can change its compact construction into a favorable 3D scanning capsule: a person or an object is placed inside, and hundreds of equally-spaced cameras take photos in the sphere.

The capsule becomes smaller or bigger depending on the size of an object. Cameras in the sphere are reliably attached to the construction joints, so they move closer or away simultaneously. The process of 3D scanning is instantaneous, and a special internal light guarantees the absence of shadows on a finished model.

Also, transporting the 3D Copypod is much easier process due to the sphere’s isokinetic construction.

According to developers, the main goal of 3D Copypod is the creation of full-color high-resolution 3D models used for 3D printing. The scanning quality remains high even if an object moves inside. However, developers haven’t presented a finished system yet, so we are to take their word for it. They haven’t also informed about a software used for 3D modeling.