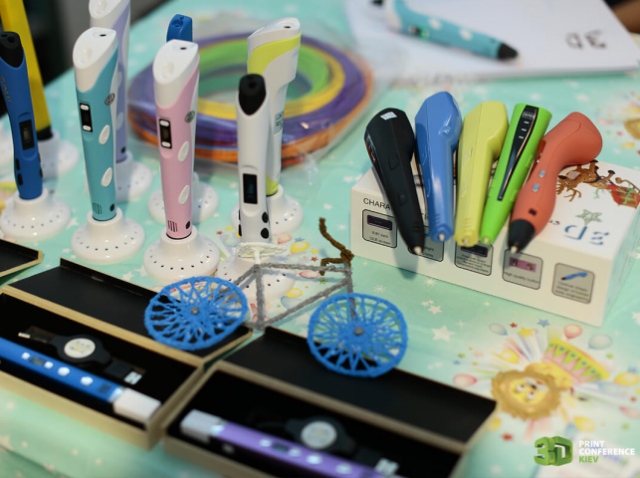 MyRiwell 3D pens are produced by JER Education Technology Co., Limited which was founded in China 16 years ago. Its products are popular in more than 30 countries because of their good quality, affordability and safe use at home.

There are four generations of MyRiwell 3D pens:

1.Without a display. It is quite difficult to regulate temperature but the speed of filament supply can be controlled by means of a slider.

2.With an LCD display. Temperature can be controlled with the help of buttons.

3.With an elegant and convenient body frame, an OLED display and buttons which control the speed of filament supply.

4.Improved models with a virtually noiseless engine, ergonomic body frame and even supply of a plastic rod at low speed.

Here are some models of MyRiwell 3D pens.

Probably, this is the cheapest product of the line-up. Moreover, the price didn’t affect the assembly quality. There are two light indicators on the pen’s body frame: the first one is lit up when the device is switched on, the second one – while heating. Besides, there are also buttons and slider for regulation of plastic supply. The model’s design is convenient and wide nozzle is almost never blocked.

As far as disadvantages are concerned, the engine is too noisy, filament is supplied unevenly at low speed, the display is lacking and the mechanism of temperature setting is complicated.

The model is similar to the previous one. However, it has two substantial benefits – an in-built LCD display and buttons for temperature regulation. Because of it a user can easily use various types of plastic. The price of RP100B isn’t high as well.

Unfortunately, the model has a noisy engine and rod supply is uneven at low speed.

The product’s design became more ergonomic and stylish. The manufacturers embedded buttons which regulate the speed of filament supply, so you can easily switch to one of three regimes. The engine became quieter, although, the pen got weightier. The display and the wide nuzzle remained the same.

The model has only one disadvantage – the USB sometimes causes problems in power supply.

This 3D pen is a real breakthrough of the company – the original design, convenient body frame with a display where important characteristics such as the type of used plastic, the speed of printing, current temperature of the nuzzle and adapted temperature are reflected. There are also buttons to regulate the speed of the rod supply, the engine is quiet, the nuzzle is thinner than it was in previous models which is convenient for creation of small details.

However, such improvements influenced the cost. In addition, the manufacturers didn’t handle the problem of uneven filament supply in this generation of 3D pens.

Has got a compact square body frame without a display. There are no buttons for temperature regulation, so a special screwdriver should be used to set a screw in the right position. Users find it hard to understand the mechanism and if the temperature setting is incorrect, a thin nuzzle is blocked.

The model’s advantages are even filament supply at any speed and a quiet engine.

This is an improved version of a previous product – the manufacturers added a display and buttons for temperature regulation. Al the benefits of RP600A model were preserved.

Some of the aforementioned MyRiwell products were presented at the exhibition-conference 3D Print Conference Kiev which took place last year. Everyone interested could take part in the competition where they had to draw an original art object using the 3D pen. The best 3D artist received a new MyRiwell model. Moreover, there were special workshops for children during which experienced experts were teaching the rising generation to use 3D pens.

MyRiwell brand regularly produces improved portable 3D devices. This year’s conference will present top and new products of the company which can be tested in the exhibition zone.