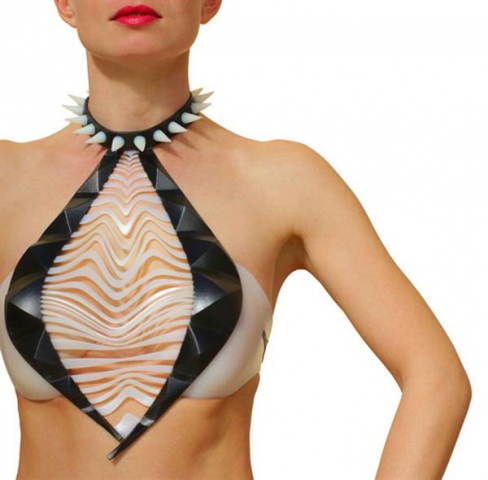 Milan’s fashion week just ended and – to be entirely honest – it did not give many indications as to high couture’s adoption of 3D printing in the design process. One of the events taking place during the week, the Lineapelle fair at Rhofieramilano, did, however, see one company, Gruppo Meccaniche Luciani, show off its recently acquired multi-color, multi-material 3D printing capabilities through a line of wearables prototyped with the Object500 Connex3 PolyJet system from Stratasys.

Inspired by naturally occurring curves with a futuristic twist, the collection comprises three pairs of shoes, a bag, bracelet, and top, featuring vibrant colours from bright pink to contrasting monochrome, along with complex rigid and soft material combinations.  And, thanks to the Connex3, each intricate item was 3D printed in a single build. For the group, the line was both a way to show off design creativity and powerful technology to complement its core business of mold manufacturing for the shoe and clothing industries.

“When designing the shoe we were concerned about the rigidity and resistance of the heels, but the 3D printer’s ability to combine varying densities of rigid and soft material simultaneously, enabled us to manufacture the whole shoe in one print,” Elisa Luciani, Sales Manager from Gruppo Meccaniche Luciani, explained. “Previously,” she added, “it was impossible to produce prototype parts such as boots and bags quickly without making a sample mold. With 3D printing we can produce high precision prototypes significantly quicker than traditional prototyping allowed.”

Similar advantages manifested in the prototyping of the monochrome wearable top and bracelet. “Using Stratasys’ materials, we were able to 3D print a top with varying levels of softness that could be worn in direct contact with the skin,” Luciani revealed. “The ability to combine rigid and soft materials simultaneously is unique and would have otherwise entailed manual manufacture and individual assembly of each material.”

Stratasys’ top level triple-jetting PolyJet system is, thus, finally establishing a primary role as a prototyping tool for the high-level design and fashion industries and, as Stratasys’ Italian Territory Manager, Davide Ferrulli, said, it “is fast-becoming a household design tool within many creative industries. Where designers were previously restricted by the limitations of traditional techniques – especially for the production of complex shapes – the precision now available through our most advanced 3D printers grants them the means to bring their creative ideas to life with incredible realism.”

It will still be some time before the fashion industry seriously considers 3D printing for end-use products; however, the effects on rapid prototyping of new designs are already quite apparent. A company such as Gruppo Meccaniche Luciani is able to design and 3D print realistic prototypes in a matter of hours, modify them, if necessary, and 3D print the revised product the same day. Others will have to follow or be left behind on the runaway.