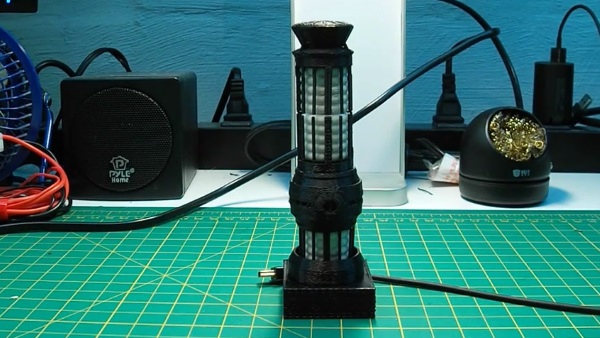 Science fiction has often been an inspiration for people who want to design and develop new products. Michael Bowers is a freelance designer based in Seattle and a Star Trek fan. He likes to create functional objects, but he is keen on sci-fi as well, so when he was watching 'Star Trek: The Next Generation' he came up with an idea: creating a table lamp and bringing the blue light of the Enterprise D into his living room.

He captured HD screenshots of the Warp Core and used Google Sketch to reproduce the shape of the Warp Core. Then he printed them out with his Printrbot Plus 3D printer. He bought a cheap blue lamp onAmazon and assembled the lamp and all the components together.

As Bowers explained, "It was designed to print in modular pieces without support. Print your Warp Core Table Lamp to be as tall as you'd like! This lamp adds a hypnotic sci-fi touch to any room. Geordi would love it."

Bowers has created and shared all the files you would need to print out your Warp Core lamp by yourself on Thingiverse, with instructions on how to wire the LED.

The modularity of the printed components makes it easy to scale up or down the dimension of the object, which could also be personalized using different colours and lights.

In fact, a 3D builder named Alex Roberts made a 25% smaller version of Bowers' one, then he powered up the Neopixel LED strips using a 5V Adafruit Trinket mini-controller. Alex has shared many useful tips on how to wire and power up the Warp Core table lamp on his blog.