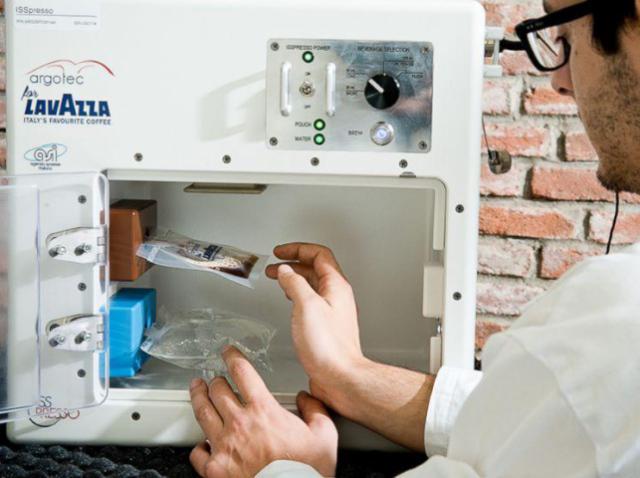 Imagine being sent up there into the cold darkness of space, where the lack of gravity makes even the simplest activity a giant task. Don't you think you'd have the right to enjoy a nice cup of coffee every now and then? While coffee substitutes were already available, freeze-dried stuff typically doesn't match the quality of the real thing.

One Italian astronaut, returning to earth in 2012, bemoaned its quality. But that problem's finally being solved, as astronauts can finally enjoy a cup of espresso aboard the ISS.But like everything aboard a space station, it requires careful consideration of the limitations of gravity-free beverages and a whole load of scientific research to realize it. The solution? 3D printed cups.

Now first of all, you might wonder what's so special about coffee. Should that really be a priority of an industry consuming billions of dollars already? And you'd be absolutely right, except for one thing: The relaxing moments over a cup of coffee are expected to greatly help combating one of the biggest problems facing astronauts: extreme isolation and stress.

Therefore the coffee experts of the Turin, Italy companies Lavazza and Argotec developed the ISSpresso: the world's first zero-gravity and certified Italian coffee maker. Italy's first female astronaut Samantha Cristoforetti delivered it to the space station this week. While making espresso here on earth is a relatively simple affair, it requires a special machine to do it in a zero gravity situation. The ISSpresso works with pouches of water, that are aspirated, pressurized and heated to the optimal espresso temperature. These are then pumped through a capsule of coffee grounds into another pouch.

But there's one other question that continued to baffle scientists and required 3D printing to solve: how do you realize the 'crema', the oily foam on the surface of espresso, that finishes the drink? After all, if you're sending something up in space, you might as well do it as correctly as possible. And as baristas the world over will tell you, the 'crema' truly completes an espresso.

Usually, gravity is key in the 'crema' process. The foam consists of a complex and low-density colloid of oils, that rise to surface of your espresso due to gravity. So what do you do in a zero-gravity situation? Fortunately professor Mark Weislogel from Portland State University, who specialized in Thermal and Fluid Sciences, developed a solution.

As he explained, 'the texture and aromatics of the 'crema' play a critical role in the overall espresso experience. We show that in low-gravity environments this may not be possible, but suggest alternatives for enjoying espresso aboard spacecraft.' The alternative? A 3D printed espresso space cup which, as he remarked 'fell from math'.

He went on to explain that shapes of containers can do much to influence the migration patterns of fluids, even when there isn't any gravity. This involves the passive forces of wetting and surface tension, that move fluids without moving parts. The rightly shaped container can then passively move fluids from one location to the other. 'Its geometry is the 'smart' part, which operate the fluids-control system without requiring pumps or centrifugal forces.' And while this would be very challenging for water-based beverages, espresso is quite an oily drink and therefore easily manipulated using these techniques.

Using 3D printing technology and mathematics, Weislogel and his colleagues therefore developed a weirdly shaped cup that mimics the 'crema' forming process on earth. Various tests in drop tower environments have proven that the cup will work in low-gravity environments like the ISS. The professor went on to confidently state that 'This process almost ensures desired performance the first time the device is used in space.'

While special coffee cups might not have been the first practical application we thought of when first reported on the installation of a 3D printer aboard the ISS, this innovation has further reaching applications. As Weislogel explained, 'We're striving to use our new methods to reassess all fluid systems aboard spacecraft—including cooling systems, fuel tanks, water processing equipment for life support, plant and animal habitats, medical fluids, foods, etc.'

This innovation is therefore best seen as part of a wide range of new innovations to improve and enable further space exploration. And 3D printing is definitely a key technology in that whole process.