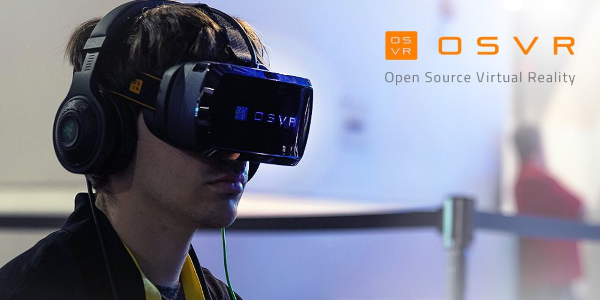 Although we’ve been hearing a myriad of announcements from the tech world regarding developments in virtual reality, few people actually own any kind of a virtual reality headset that doesn’t incorporate their smartphone into a cardboard box.  Between Microsoft’s Holo Lens and the Oculus Rift, there are certainly some exciting products on the horizon - but what about something that’s accessible right now?  What if you could build it yourself and hack it to your liking?  This is the problem that gaming brand Razer has been wanted to solve for a few years now.

The company, which was founded in a tiny shared office in San Diego by current CEO Min-Liang Tan and Robert "Razerguy" Krakoff, has shipped over 11 million connected devices and has grown to 400 employees with offices in 10 cities across the globe. Needless to say, Razer certainly has the resources to create a viable VR experience.

Two months ago, the company introduced their OSVR initiative that aimed to put virtual reality technology into the hands of developer and customers through an open source platform.  Since their announcement, a variety of companies and independent developers have signed on to support the platform through their Hacker Development Kits.

Although a large focus of the open source nature has been in software development, the company is alsoreleasing the headset schematics as a free download for those who want to focus on hardware development, or otherwise 3D print their own headsets and accessories.  Although the 3D print files are available, the $200 OSVR Hacker Dev Kit will ship with a pre-manufactured and modular VR headset as well as circuit boards that can be swapped out as updates are released.

When using Razer OSVR, hackers, users, developers, companies and 3D printing enthusiasts will be able to develop software or hardware that works on multiple VR operating systems and headsets including applications ranging from video games to gesture-controlled multimedia experiences and VR hardware accessories.

Included with the OSVR Hacker Dev Kit is a 5.5 - inch Full HD display that is comparable to the screen within the much-anticipated Oculus Rift DK2 as well as a sensor hub for head tracking that includes a compass, an accelerometer and a gyroscope.

The ability to 3D print your own virtual reality headset at a low cost will surely change the landscape of the near-future of VR technology and content creation.  While the VR experience is certainly exciting, content creators ranging from video game developer to film makers are weary of producing content due to the high up-front cost and relatively small market of VR users.

In combination with the upcoming releases of the HoloLens and the Oculus Rift, Razer might singlehandedly be able to dramatically bring down the high costs that have been keeping virtual reality out of the hands of many who want to use it.  Perhaps most importantly though, is that the open source nature of the OSVR Hacker Kit will allow developers and hardware hackers to create and 3D print VR experiences that never would have been able to be created otherwise.

"Innovation should never be hindered the lack of resources or tools, which is why the OSVR Developer Kit was designed to be affordable," said Razer on their website.

"Consisting of a head-tracker, a display, double-lens optics, mechanics such as straps to hold it all together, as well as connective cables, the Developer Kit ensures you have all you need to engineer an amazing VR experience, without breaking the bank."

While the latest iteration of the Hacker Developer Kit will be shipping in June for roughly $200 in the United States, the company is yet to confirm if the device will be shipping globally at that time. To find out more about how to create your own 3D printed VR headset and create customized add-ons, head over to Razer.