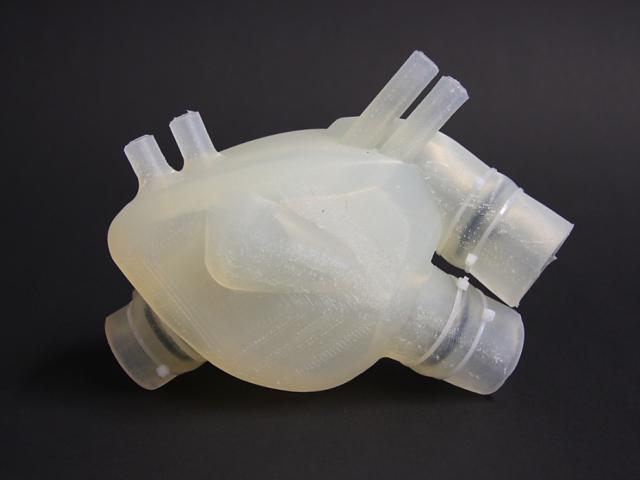 Swiss scientists from Swiss Federal Institute of Technology Zurich (ETH Zurich) have produced a functional heart prototype using a 3D printer. It beats almost like its real analogue, allowing to pump liquid similar to blood in terms of viscosity. Researchers published the report on their solution in the Artificial Organs journal.

Swiss scientists’ equipment simulates the construction and function of a real heart as accurately as possible. It is soft, consists of two ventricles with input and output valves. There is a special chamber between ventricles that swells out and blows off using a special pump, acting as a cardiac muscle.

The prototype weighs 390 g, which is much more than the common weight of man’s heart: 332 g.

The artificial organ was created using additive technologies. Researchers produced a form on the 3D printer and coated it with silicon. y obtained a soft functional heart able to withstand no more than three thousand beats: less than an hour of function. Scientists found out that to increase a functioning period of the artificial organ, they had to improve its material. Now, they are working on this aspect.

Dozens of millions of people all over the world suffer from various heart diseases. To save patient’s life in particularly nasty cases, one should perform a heart transplant. Unfortunately, there are not enough imported organs for everyone, thus doctors have learned how to implement artificial implants: metallic or plastic mechanisms for supporting heart function. They are short-term and allows a patient to live to the imported organ transplantation. These mechanisms have a complex construction, frequently get broken and do not provide pulse, so it is difficult to monitor their functioning.

The artificial heart made by ETH Zurich scientists does not have such defects and will allow to save more patients’ lives.