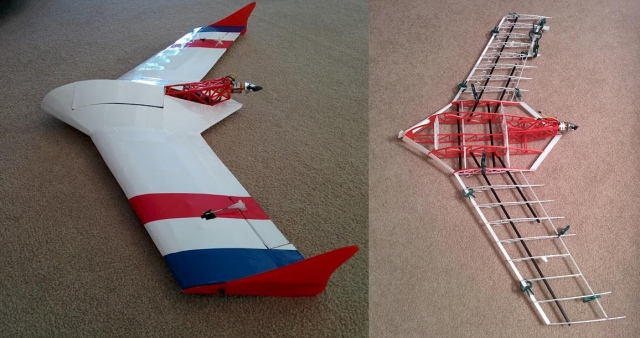 3D printing and RC vehicles have become quite the craze as of late within the 3D printing community. There are amazing projects such as the OpenRC Project andOpenRailway Project, which have taken the idea of radio-controlled vehicles and added in complete customization options via 3D printing. There are individuals out there who are 3D printing everything from small parts for their RC vehicles, to entire full-body buggies and truggies. We’ve also seen endless amounts of drone-like aerial vehicles come to be via 3D printing with a plethora of designs for quadcopters, hexacopters, etc. all available to download and 3D print free of charge from websites such as Thingiverse.

Now, one mechanical engineer from Vancouver Island, in Canada, named André Roy has taken this a step further. He loved the customization aspects that 3D printing provided but he didn’t want to just create the same things that were already abundant on the internet, so he decided to design and fabricate a 3D printed flying wing, called the OpenRC Swift, as part of the OpenRC Project.

The flying wing, as you can see in the photos, is quite the amazing design. It is entirely open source, and Roy himself is a huge supporter of open sourcing of 3D printable designs. He believes that more people should be using this type of licensing in order to help 3D printing grow as a technology.

Roy isn’t alone on this project, as he has received the help of many along the way. In fact, Brook Drumm, CEO of Printrbot, has lent a huge hand to Roy’s cause with a major contribution to the project.

“I started experimenting with different ways of using my 3D printer to make airplane models when a picture I posted of a few wing ribs mocked up to form a wing with a bit of balsa sheeting caught the attention of Brook Drumm from Printrbot,” Roy tells us. “We got to talking by email and he wound up giving me a Printrbot Go Large to help me out. It’s massive, with a 600mmx300mm (2’x1′) build plate. A large build plate is pretty useful for making model airplanes.”

The huge Printrbot Go Large allows Roy to print larger parts and fewer of them, which leads to a larger, more solid body, while remaining extremely light-weight at the same time. The latest iteration of Roy’s flying wing only weighs about 650 grams, and this includes all of the electronics on board, such as the servos and motor.

Projects like this take a lot of time and work to perfect, but Roy is getting pretty close to doing so.  As expected though, Roy has run into a few minor problems along the way.

” I recently crashed my first prototype when trying to find where to place the center of gravity,” he tells us. “No big deal, I salvaged the carbon fibre spars and am printing out my 2nd prototype. I corrected my error, this one will fly.”

When it does, we will all certainly be watching with curiosity and excitement. Because these files and designs are open source, Roy’s success means the success of everyone who takes part in downloading, 3D printing and modifying his design in the future as well. For those of you interested in creating your own OpenRC Swift Flying Wing, you can do so by visiting the official GitHub page, where Roy is constantly updating the files available.

“This is a demonstration project to encourage others to follow in my footsteps. I want others to create new designs and release them under open source licenses so other people, such as myself, can eventually 3D print any model they desire from a large library of open source designs created by the community: P-51 models, Spitfires, Cessnas etc.,” says Roy.

What do you think? Will you consider 3D printing and assembling this flying wing? What changes would you like to see made to it? Discuss in the Flying Wing forum thread on 3DPB.com. Check out the video below where Roy talks more about his flying wing back, this past May.