MakerBot wants you to start 3D-printing in metal and wood 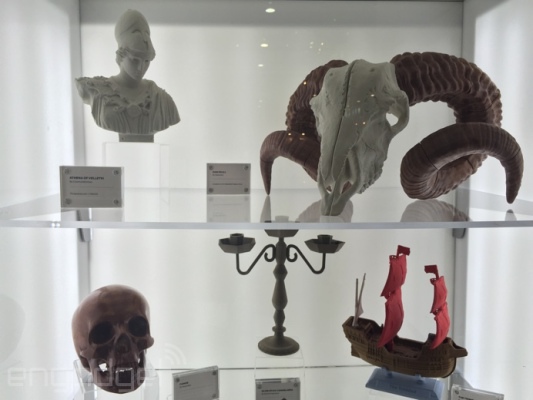 The future of 3D printing may depend on the ability print things with properties beyond cheap plastic. We've seen composite materials appear for 3D printers before, but the arrival of MakerBot to the scene should make progress a bit quicker. Announced at this week's CES, MakerBot will be rolling out new composite filaments that have been chemically bonded with new materials. You'll have to wait until late 2015, but it's probably going to be worth it: Maplewood, limestone, iron and bronze PLA composites are coming. And in real life, they look and feel far more impressive than you might think.

It's difficult to describe what a 3D-printed hammer feels like when the head is made of an iron-plastic composite and the handle a maplewood one. The metal part feels colder, but it's not quite as cold as iron. Meanwhile the surface of the handle, the distribution of weight and the feel make it seem like borderline for-real wood. It's a strange thing: Somewhere between a real hammer and one made entirely of plastic. Hammer lite. (Even better, because it's a maplewood composite, it smells like maplewood!)

Using these advanced composite plastics will ensure prototypes are far more realistic. MakerBot demonstrated the range of uses with a museum-style exhibit: marble busts printed with the limestone plastic, wooden boats and a skull. Interestingly, because the plastic takes on the properties of the added material, it means you'll be able to stain, sand and treat wood-based plastics, while iron-based creations can actually be magnetized. There's a whole lot of potential here.