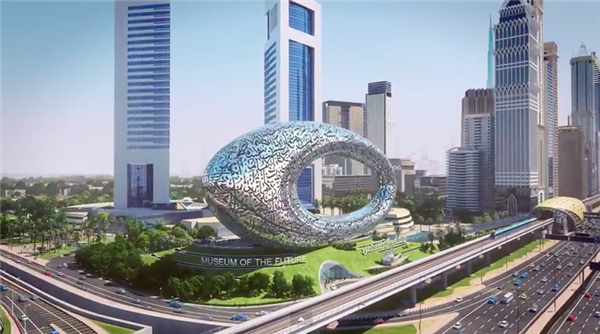 As if the dramatically changing landscape of Dubai isn’t already futuristic-looking as it is, a new building set to open in 2017 is about to make the landscape even more so - while at the same time celebrating what the future holds.

The ‘Museum of the Future’, which is slated to cost an estimated $500 million is being billed as a tribute to mankind and in addition to housing futuristic inventions and concepts, will be built using additive manufacturing construction techniques.

Earlier this week, His Highness Shaikh Mohammed bin Rashid Al Maktoum, Vice-President and Prime Minister of the UAE and Ruler of Dubai, unveiled the blueprints for the museum which will feature the motto “see the future, create the future”. “His Highness Shaikh Khalifa bin Zayed Al Nahyan, our President, has declared 2015 to be the year of innovation in the UAE. Today we show how serious and committed we are to that mission by turning the UAE into a major international destination for innovators,” said Shaikh Mohammed at blueprint unveiling ceremony.

The goal of the museum - aside from showcasing futuristic inventions and concepts to the general public - will be to bring together researchers, designers, inventors and financiers to test, fund and market futuristic prototypes and services.  The several on-site ‘innovation labs’ will focus on health, education. urban development, energy, transportation and other industries that are helping pave the way into the future.  The facilities will be open to tech companies, start-ups and researchers to develop and showcase their inventions.  A large part of the museum experience for visitors will be to experience demonstrations of these cutting-edge concepts and technologies.

Additionally, the museum will act as a hub for science and technology conferences as well as offer workshops for design and innovation.

“It reflects a new approach to government innovation,” said Shaikh Mohammed at the launch ceremony, “as it will use design, technology prototyping and foresight to create real examples of change. The museum is the first of its kind, and represents a leading example of entrepreneurial governments embracing change and creating futuristic visions for a better world”.

As for the design of the museum,  a global contest encouraged designers and architects to interpret “Shaikh Mohammed’s vision for the future and turn it into an ‘object’ that looked futuristic and timeless.”  While little has been revealed about how the panels of the final building design will be 3D printed, they will feature Shaikh Mohammed’s poems that describe his vision of the future. “The world is entering a new era of accelerated knowledge and great technological revolutions. We aim to lead in that era, not to follow and lag behind. The Museum of the Future is the first step of many to come, marking the beginning of great achievements,” Shaikh Mohammed said.

It should come as little surprise that 3D printing is being incorporated into the final design of the Museum of the Future.  Today, many of the most advanced technologies and developments wouldn’t have been possible without the capabilities that additive manufacturing has to offer - particularly in bringing costs down and creating custom-tailored design solutions.  Between enabling prosthetics to be more affordable to creating custom aerospace parts, no other form of manufacturing has been able to advance product design and development as much as additive manufacturing has in the last century.

“The future belongs to those who can imagine it, design it, and execute it.  While others try to predict the future, we create it,” added Shaikh Mohammed.